Hey guys!
This should be simple… We’re looking to use the toolkit to simply reboot the computer while giving the users a nice window letting them know the reboot is happening. No apps are being installed and no changes are being made to the computer…we just want to notify users of the reboot.

What’s the best way to do this using the toolkit?

So what else are my other options?

FYI: There are a few caveats that people fall in all the time:

So I’ve added the installationRestartPrompt, but nothing happens as we’re not executing any command. I just get the window that says installation starts and completes, but no countdown window ever shows and the computer never reboots.

If it works, then you have to set interactive installation in SCCM, or using ServiceUI.exe with Intune, or other settings if you are using other distribution tools.

Ok, so I got the restart prompt window to show up, but there is no countdown or buttons as shown in the example below, so what am I missing? 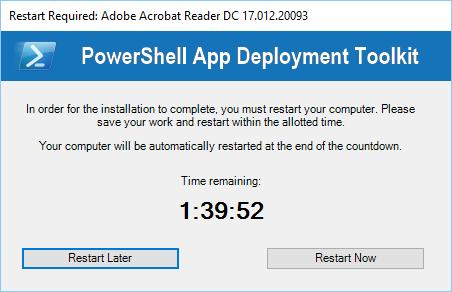 This is what I have in my template at work:

With this I DO NOT get any buttons that say Restart Later or Restart Now. How do I get those buttons?

It’s not exactly what you were asking about, but I use Reboot Dialog to insist that users reboot on my schedule - not when they decide to finally get around to it.

The app is very configurable and may do what you need. While it doesn’t force a reboot, reminding users every 3 minutes should be pretty convincing. 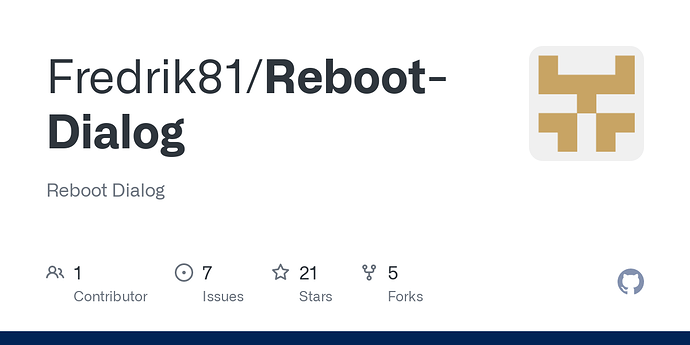 Reboot Dialog. Contribute to Fredrik81/Reboot-Dialog development by creating an account on GitHub. 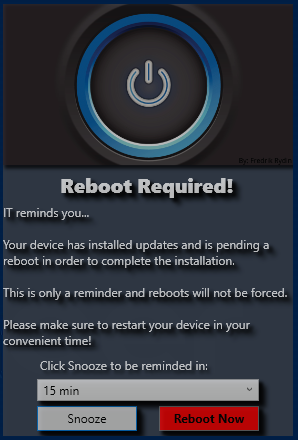 unfortunately that didn’t help. Now it’s just stuck on the install window, with no buttons anywhere

Another thing you could do is show what the PSADT log file when it gets to the Show-InstallationRestartPrompt line.

Even at that, there isn’t much we can do. It should just work.

But it only defaults to 1 minute. As soon as I add: -Countdownseconds 300 -CountdownNoHideSeconds 299

The timer goes away and no buttons are shown to give the user the option to restart now or later.

But again, there’s no countdown.

Where can I get my hands on the 3.8.5 beta? Google search doesn’t yield any concrete links.

There will be extra files. focus on the \PSAppDeployToolkit-master\Toolkit\ folder

Then have SCCM force the reboot?

The 3.8.5 beta version fixed the issue. All good now. Thanks!