I have used the Toolkit to deploy a new Word template to our users via Intune, it’s a pretty simple script see the code below:

To replace the Word template the Word application must be closed off, so i have enabled the user interaction and to make it close Word by consent of the user: Show-InstallationWelcome -CloseApps ‘winword=Microsoft Office Word’ -AllowDefer -DeferTimes 3 -CheckDiskSpace -PersistPrompt

This all works good and the template is being replaced and i see in Intune that the install is successful, but I’m having allot of complaint from users that the setups keep prompting every time the start up there Windows system.

I have checked within Intune and i see that the software is being shown as successfully installed for these users, the first time i made the package it was with version version 3.8.1 and i have now repackaged it with the latest version but users are still getting the install prompt.

Unfortunately I’m unable to reproduce on my system.
Does anybody have an idea what could be causing this problem?

Installation prompt from what?

From the deployment toolkit. 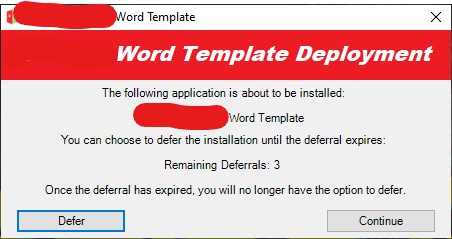 The toolkit doesn’t start itself. So its probably Intune.

If its still doing this after install > restart, you may need to check how you evaluate if its deployed or not, looks like its looping hence detection method.

That’s the thing it is deployed and i see in Intune that its installed successfully for all users, so the detection rule is working.