Hi all, i’m attempting to install multiple msi at once via psappdep, but for some reason sccm doesnt want to deploy it like that, even though powershell works when executed standalone. Not a permissions issue.

if I manually run ps script it works fine, but when SCCM tries to execute this. I’m getting failed

this is my original part

has anyone came up with better version which looks at folder, finds all msi, and then runs them one after other?

Is there a way to create array and then call from psapp deploy? Any hints are welcome.
Thanks

nt to deploy it like that, even though powershell works when executed standalone. Not a per

Try publishing an cmd.exe via the software center. Give a fake detections method so that you can keep the exe running while you test as SYSTEM account.

It would help the troubleshooting if you post the error message that you get.

thanks for reply Sven,

as for logs, which ones are you after? can you name few which I could check etc?

Just to add few cents - when I execute other apps to install, it works OK. with simple MSI and in Deployment option = (“Deploy-Application.exe” Install)

My problem (and maybe solution?) that when I execute script on itself it works fine, but from my limited exposure to psappdeploy there is whole bunch of background commands it relies on.

I have tried to just run the ps with Powershell.exe -ExecutionPolicy ByPass -File “Your-Scriptfilename.PS1” - that failed (dont see any erros which can explain why, or dont know where to look for ccm logs which explain the error.)

I have tried to jsut import standalone script (below) - with just that - that also failed. Maybe it doesnt like to call MSI from unc path? but then why does running scipt as admin work fine

–Try publishing an cmd.exe via the software center. Give a fake detections method so that you can keep the exe running while you test as SYSTEM account.

is this just to see if application.exe can be deployed?

Well you are trying to read and execute files from another machine, but the account being used is local - SYSTEM. When you run it manually, you are logged in, presumably as a domain user, with access to the share/remote machine. Do you have share permissions setup correctly?

I see,
So if I make the following changes:

How would I then instruct the script to look at this random folder (2w) without giving literal path in this script?

is there is a variable in psappdeploy I can use? I have tried $workdir or $dirFiles but issue is that msi files are inside the 2w\files

$dirFiles is variable that contains the full path to current toolkit’s Files folder. In your example it would be: C:\Windows\ccmcache\2w\Files

Thanks, I’ll give that I try.
Also can you give me a tip how to better regression test apps with ps script without deploying them, then modifying the script (if there is an error) then update content sccm, rerun app eval and try to install this again. If there a quicker way?

It creates a service, which runs under SYSTEM and then starts the exe you tell it to and then removes the service. SCCM agent has its own service and thats how it starts deployments as SYSTEM.

is this just to see if application.exe can be deployed?

this is an easy method to have your command prompt everywhere.
See screenshot below 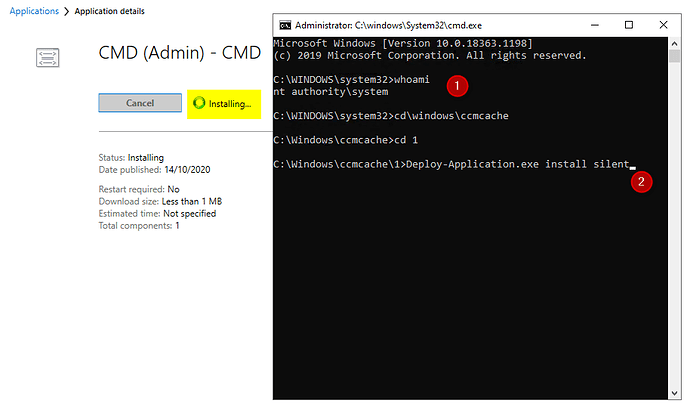