So, as shown in the attached screenshot, Deploy-Application.exe appears to be running twice. One is running the script I made. The other appears to just show Installation in Progress. This happens only with a few packages I’ve made. I can’t seem to find a correlation between what works and what doesn’t. The example package here is one that installs all the VC++ redistributables (mix of MSIs and EXEs). Another package that doesn’t have this issue is for 7zip (MSI only). I also have other packages that use EXE installers that don’t have the issue but at least one other that is only EXE installers that has the issue. This is ruining my zero touch build and capture task sequence in MDT. This happens inside or outside MDT. Anybody got any ideas? 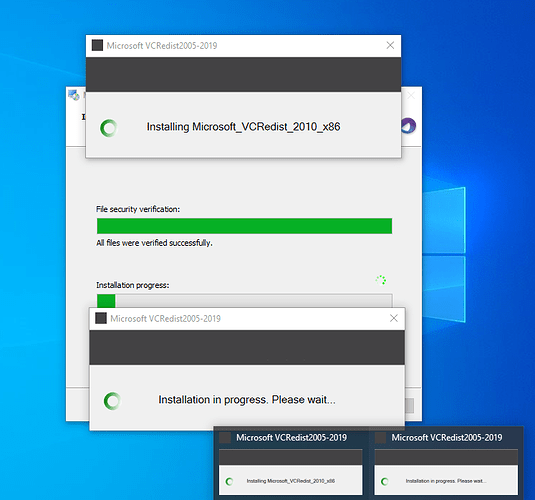 Can you maybe show us the log file from an affected install, and if possible, the script itself?

Thanks for your help!

Also, I seem to have forgotten the main problem with what’s happening. The second running application doesn’t seem to close so the task sequence is stuck at that point until I close it manually. The packages that this happens to appear to install everything just fine.

Thanks for the help!

Show-InstallationProgress used to open another window, now it changes the text on the current running window. This function does not wait by default, so even if it did change the text back in old versions, you would see the second message right away. It is supposed to be open while another code is running in background - installing software.